Visit to a Craftsman

On one of my visits to Japan about ten years ago, I purchased a woodblock print made a number of years ago by Toshi Yoshida. It depicts a scene in Fukui Prefecture, a large vermillion gate to a shrine in Otaki village. Mr. Yoshida must have sketched the scene on a trip to visit one of the workshops in the town, for this is one of the famous papermaking villages of old Japan. For many hundreds of years the principal occupation of the residents has been the production of traditional Japanese paper, specifically 'Echizen washi', after the Edo-era name of the district.

As my family strolled up the slope through the village one morning late this past August, we found ourselves face-to-face with the scene shown in Mr. Yoshida's print. The basic view hasn't altered much; stone lanterns still guard the approach, and a thatched roof house stands near the large gate, which still straddles the road. The passage of the years is marked by a few changes; the new asphalt road surface, the convenience store visible off to one side, and the trucks roaring through the gateway loaded with bales of paper from the factories which have largely replaced the old workshops. 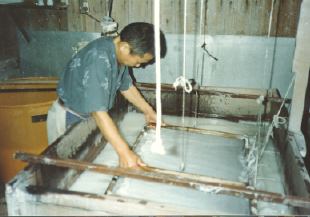 We had left our hotel quite early, but when we arrived at the workshop the day's labour was already well under way. Mr. Kazuo Yamaguchi and his wife Kinuko were busy at their task of turning tree bark into works of art, glowing sheets of 'washi'. They were doing the final preparation necessary before the actual work of 'rocking' the paper could begin, Kazuo-san rinsing a pile of kozo (mulberry) fiber which has just been beaten, and Kinuko-san picking out unwanted pieces of dark coloured bark.

It was a day just a few months after the end of the war when the 15-year old Kazuo first started work in this room, the seventh generation of his family to train in this craft. He has been here ever since, spending seven days a week bent over his vat of kozo fibers, holding a wide bamboo screen, and dipping and rocking, dipping and rocking, until each sheet of paper takes shape before his eyes. Now, 45 years later, as I stand by his side and watch, I am amazed at the intensity with which he works. As he rocks the screen gently forward and back his eyes are never still, scanning every square inch of the emerging paper surface for imperfections or problems. A casual toss of the wrist sends a lump of fiber flying off the screen. A slightly stronger shaking motion smooths an overly thick area. He is in complete control of the developing sheet.

As the day wears on, the sunlight slants further into the room, illuminating the kozo fibers in the vat and turning the mixture into an iridescent liquid silk, swirled by his dipping motions. The pile of paper grows higher, and by the time he is finished when the sun goes down this evening there will be between 100 and 150 sheets stacked there. Over the next few days these will be drained, squeezed in an ancient press, dried on wide boards, and then finally shipped out to an impatient printmaker somewhere, perhaps in Japan, or perhaps in Canada or Europe, one who has been waiting for the shipment for a long time.

A generation ago this area was crowded with workshops run by people like Yamaguchi-san, but over the years, one by one, they have either switched over to mechanized methods of production using wood pulp, or have closed their doors for lack of new workers willing to take over. These days, young people willing to step into their father's shoes are few and far between, especially when those shoes will spend so much time rooted to one spot, and when the work is so old-fashioned and repetitive. Demand for paper like Yamaguchi-san's is high, but he is forced to turn away customers. There are only so many hours in a day that one man can stand there with his hands in the vat. 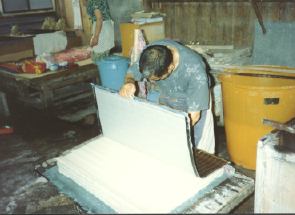 Material supply is a problem too. Cultivating and harvesting the mulberry trees is very labour intensive and basically unrewarding work, and it is becoming more and more difficult for Yamaguchi-san to obtain adequate supplies of raw material. Every year more and more of his suppliers close their doors, and the story is always the same - there is nobody to take over from the elderly workers who are retiring. When I get nervous and ask him about future supply, he laughs and tells me not to worry. He will certainly be able to make the paper I need to complete my print series over the next seven or eight years. As for the future ... he simply shrugs his shoulders.

In future issues of this newsletter you will be reading more about the Yamaguchi family. Their washi plays a very important part in my work. It is literally impossible to use any other kind of paper for woodblock printmaking. The repeated full-strength rubbing on the back of each damp sheet during the printing process would utterly destroy any Western paper, and even most weaker Japanese papers. Kozo is the material ... and Yamaguchi-san is the man to put it together. Ever since I have been making prints on his paper, I have sent him a copy of each completed print. I want to make sure that he is fully aware of what an important part he plays. Usually, once his paper leaves his shop, he never sees it again, but I want him to see in his mind, as he stands in front of the vat, the finished product. One of the great pleasures in this project for me is to view the entire process, the bringing together of scraps of tree bark, lumps of iron, clods of coloured earth, scraps of shark skin, sheaves of bamboo leaves .... the list seems endless.

When you receive your next print from me, look along the right hand vertical margin. The characters printed there tell the story: 'paper by Kazuo Yamaguchi'.

Mr. and Mrs. Yamaguchi, for your dedication to your ancient traditions, thank you very much. 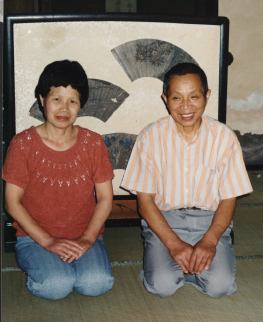